Our sheep orchard is positively heaving with apples, heavy and ripe for the picking.  It’s making us crave comforting pies, crumbles and preserves and all manner of apple-y deliciousness.

Apples and Kent are synonymous – just ask one of Kent’s growing tribe of craft cider and juice producers.  In a few weeks, our annual Apple & Cider Fayre will celebrate the humble Kentish Apple in all its forms, its versatility and the county’s dominance as an apple grower.

Home to some 50 varieties of cooking and dessert apple, from the oldest, an ancient variety dating back to the 1292, to the most recent, a 1982 Queen Cox, each was chosen and developed for the London market.

We chatted to head gardener and horticulturist, Debs Reason, celebrating 20 years at Kent Life next year, to find get the lowdown on our apples.

How do you look after such old orchards?

We can’t spray our apples because of the animals, so we just have to walk round and keep a close eye on them.  We have lost several varieties to fungus, which is to be expected in such an old orchard and when we do the winter pruning, we take out anything that is diseased.  The pruning is a very specialist job and not many people are taught how to do it nowadays.

Tell us about the apple harvest and festival?

We start picking the apples in September and store them in the Oast house as it’s nice and cool in there.  The day before the apple & cider fayre, we display all the apples by variety on tables in the marquee. One side of the tent will be cooking apples and the other side, dessert apples.  We label them so visitors can see what it is and how old it is and we can point people in the right direction depending on what they are looking for. There’s basically an apple for everyone, depending on what you want it for!

With the help of the Friends of Kent Life, we do the crushing, mashing and juicing, using the original Victorian apple press and hopper, which has always been on-site.  The juice varies every year depending on the varieties available but one thing is certain, you won’t get fresher juice than this.

What’s your take on the crop this year, is it a good year for apples?

I think because we had such a hot year last year, this year is a very good year for apples.  The bees were out at the right time in Spring and we’ve had more rain.  It will be a good apple crop, as long as it’s not too dry in the next few weeks as the apples will start dropping too soon!  We should be able to pick lots of different varieties

Tell us a bit more about the varieties….

I always think of our apples as ‘a Taste of History’, as we have some very different, old heritage varieties.  Many visitors are just amazed at how many varieties there are.  We have a very sour apple and, over the years, we’ve developed a bit of a following for that one.  In fact, we’ve compiled a list of apples that people like, recording which ones they’ve tried and we do get people coming back each year and asking for certain types.

How long can you store apples for?

The big cooking apples, which are really dense, can be stored until January or February, if wrapped individually.  The dessert apples have more sugar in them, so they don’t last as long.  It’s the cooking apples that are the toughies of the apple world.  In fact, there’s one that you’re not supposed to eat until Christmas, it’s called Bound’s Rennet, it’s bright red and it ripens in December.

How many apples will you harvest this year?

The total number we harvest must be in the thousands – we completely filled the roundel in the Oast House the year before last! 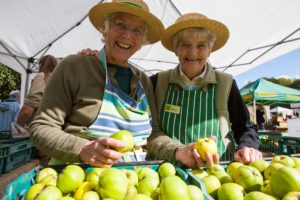 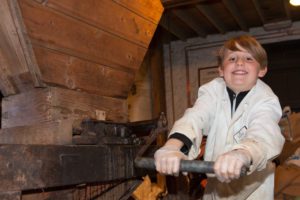 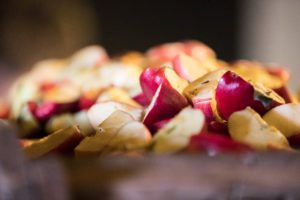 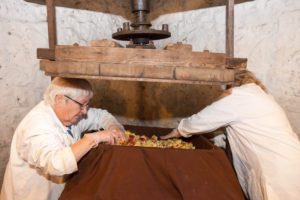 Apple facts: did you know?

We'd love for you to keep in touch - to receive the latest news and offers, why not join our mailing list!