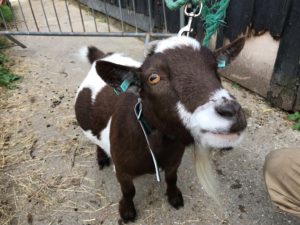 PLAYING THE GOAT: BACKSTAGE WITH OUR STARS OF THE ANIMAL ANTICS SUMMER SHOW

Much of the chatter in the farmyard recently has been all about this summer’s stars of the Animal Antics show: the goats.  There’s even been whisperings of some Diva-esque behaviour in the goat pen as stardom strikes…

So, we took some time out and went backstage to find out more about our stars in the making and look at why they are responding so well to being put on a pedestal.

First up, brothers Bert & Ernie, our African pygmy goats, have been getting lots of ‘oohs and aahs’ from the crowd due to their miniature proportions, rotund bellies and comical waddle, no doubt. These two characters have become pretty nimble at hopping over the hurdles and, like all true foodies, really will be coerced into doing almost anything for a tasty treat!

Next it’s the turn of Bert & Ernie’s fellow billy goats or bucks, Jarjar and Dumbo, the young six-month-old Anglo-Nubian castrated males, who joined us in March as kids and were bottle-fed. Jarjar loves nothing more than to show-off his party trick of walking on his back legs and has discovered it’s a bit of a crowd-pleaser.  Meanwhile, Dumbo definitely has diva tendencies, preferring to stay on the stage, while Jarjar weaves the slalom course!

Finally, our young ladies or nanny goats, Tiffin and Tallulah, like to show the lads how it’s done!  This pair of six-month-old British Toggenburgs complete the entire course, including the oh-so-tricky see-saw with minimal fuss.  Tiffin, who is very energetic and noisy during the course, likes to kick back after the show with a crown of hay – and who can blame her!  Tallulah is very friendly, loves a cuddle and will even lay on you if you sit down.  Our top goat during training, this girl’s a true professional, picking up everything with ease and taking it all in her stride.

Our Animal Antics’ goats represent just three breeds from more than 300 species of goat in the world.  Other resident breeds at Kent Life are our three Golden Guernseys, Amy, Apricot and Apple, who are on the breed survival trust list minority meaning there are only between 500-1000 in England.

Like us, you might be wondering why the goats have taken so well to being centre-stage in the agility show?  Well, we think it’s probably a lot to do with a goat’s key natural attributes: they’re intelligent; they’re agile and well known for their ability to climb and balance – climbing trees is pretty normal in the goat world; and of course they have voracious appetites, which means they can be persuaded to try pretty much anything in exchange for food.

Finally, could there be another reason why our goats are living up to those thespian tendencies?  Recent research has found that goats – one of the earliest animals known to have been domesticated for food production – are drawn to happy, smiling human faces and have the ability to connect emotionally.  So, there you have it, scientific proof that they are certainly loving all the Kent Life crowd appreciation!

We'd love for you to keep in touch - to receive the latest news and offers, why not join our mailing list!